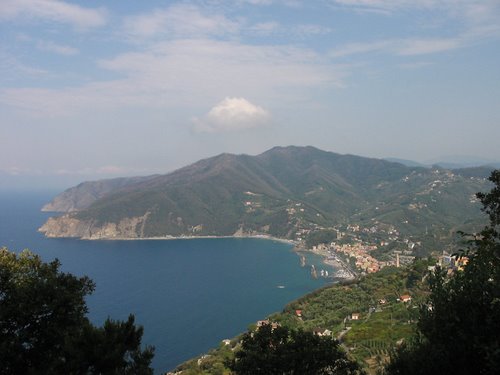 The eastern most town in the Province of Genoa is Moneglia. Founded by the Romans because of its strategic position, it is cited as “Ad Monilia”. The Genoese acquired it in 1173 and built here two castles, Villafranca and Monleone, they then turned it into a powerful outpost of the Republic, mainly used against the Malaspina family. Still today the village is dominated by the two fortresses. The parish church of Santa Croce, dating back to 14th century and rebuilt in 17th , preserves precious works of art by the Genoese and Byzantine schools. The church of San Giorgio, with its wonderful parvis, has been in use since 1396 by the Franciscans and houses the famous “Adoration of the Magi” by Luca Cambiaso, one of the most important Genoese painters of the 16th c., who was born right in Moneglia in 1527. Worthwhile visiting is also The Oratory of Disciplinanti, which, according to the inscription on the entrance, dates back to 11th century: the decoration was carried out between the late 15th and early 16th centuries and illustrates histories of Christ and the Virgin.  Today Moneglia is a popular tourist resort: thanks to the cleanliness of its sea and the efficiency of the services the town has been awarded with the Blue Flag (eco-label).