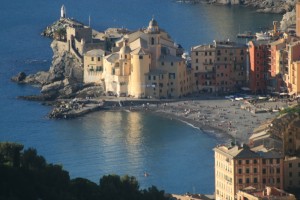 The town of “the thousand white vessels” still preserves the flavour of its ancient traditions in the network of “caruggi” (alleys). The Basilica of Santa Maria Assunta is charming as it rises on the top of the island overhanging the sea. The Marine Museum, founded in 1938 by Gio Bono Ferrari, is a true small treasure, unknown to the most. In the collection, the Camogli vessels are recalled  through paintings, tapestries, ship equipment donated by the locals during two centuries. On the second Sunday of May the annual “Sagra del Pesce” (Fish Festival) must not be missed.

From Camogli it is possible to reach by boat the “Punta Chiappa” cape and the San Fruttuoso bay. The latter has been a Benedictine Abbey, then it has been a Doria property ( Genoese noble family )  throughout the centuries and finally it was donated to F.A.I. ( Italian National Trust ) as Italian heritage. The Doria Tower, built by the family in 16th century, watches the continuous passing of time.