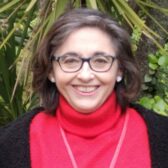 I have been working as a tourist guide since 1991 in Genoa, my city, and in the nearby tourist resorts of the Riviera (such as Portofino, Camogli, S. Margherita). I still illustrate with the same passion the culture, art, traditions, tastes and beautiful landscapes of my territory.  Since I was young I have felt an interest in classical studies, also as a result of numerous cultural visits to cities of art both in Italy and abroad.  This orientation led to my choice of the Italian Liceo Classico.
After high school graduation I studied foreign languages, reaching an advanced level, as demonstrated by the certificates I obtained: the Cambridge Certificate of Proficiency in English, the Certificat de Grenoble of the Alliance Française of Genoa (formerly Centre Galliera of Genoa), the Kleines Deutsches Sprachdiplom of the Goethe Institut of Genoa. I also attended the Centro de Lengua Española in Genoa for several years. I lived for a year in Baltimore (USA) between 1987 and 1988, where, as part of the twinning between the cities of Genoa and Baltimore, I collaborated as an interpreter/translator with the Regional School for Professional Training E.N.F.A.P.I. of Genoa and for the Twinning Committee. I have done study sojourns in Germany (3 months) and France (3 months).