Castelnuovo Magra is located in the Magra Valley, near the Bettigna Stream Valley. Castelnuovo is not far from Sarzana and the Magra River Delta.
Castelnuovo Magra was founded by the Bishops of Luni in the 12th century for strategic purposes.
The historical centre is located on a hill surrounded by the splendid Alpi Apuane. The architecture of Castelnuovo is layered with overlapping historical periods. A medieval hamlet, 16th century buildings and the turris magna, the corner tower of the “Palazzo Vescovile” can all be found in the historical centre. Nella parrocchiale di Santa Maria Maddalena è conservato un dipinto del fiammingo Peter Brueghel il giovane, la “Crocifissione”, risalente al XVII secolo.

The view from Castelnuovo Magra is breathtaking. It spans the lower Magra Valley, reaching the Tyrrhenian Coast, all the way to Versilia.
The surrounding hills are filled with olive trees and vineyards.
The Enoteca of Liguria and Lunigiana is located in the cellars of the town hall. Famous local wines can be tasted here, in particolare del Vermentino doc, prodotto di punta nel panorama vitivinicolo della vallata. Numerous restaurants, offering typical “Lunigiana” cuisine, can also be found in the area.
Castelnuovo Magra is one of the four towns crossed by the Via Francigena, according to ancient documents. .
The town of Castelnuovo Magra has been awarded the Bandiera Arancione (the Orange Flag), by the Touring Club Italiano. The Bandiera Arancione is an award given to small inland towns for the quality of their tourist attractions and environment.

Highway A12, 8 Km far from tollgate of Sarzana 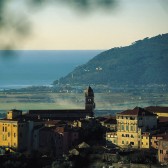 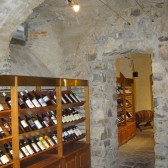 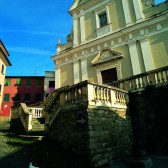 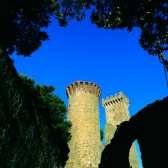 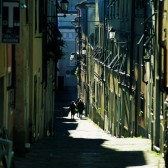